CASTELL’UMBERTO The journey begins from the place that, especially in small towns, there is, par excellence, as a place of social aggregation, “la piazza”. 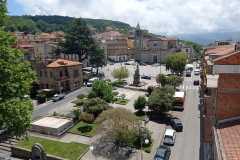 The journey begins from the place that, especially in small towns, there is, par excellence, as a place of social aggregation, “la piazza”. A big “clean” space on an inclined plane, you have almost the impression of being in front of a surrealistic painting by De Chirico, so is Piazza IV Novembre.

Built between 1920 and 1930, renovated with the 1997 project, possesses extraordinary spatial potential, both for what it symbolically represents the presence of “significant architectures” that define it: parish church, Town Hall, municipal park.

The choice of construction materials had as reference the context; is basalt flooring Etna with intersections of elements in local sandstone, sandstone in the long sitting in the shade of eucalyptus trees.

One side of the square is bordered by the mother church. Its construction began in 1931, thanks to State funds and interest of Archpriest Giuseppe Salpietro.

The reinforced concrete structure is clad with sandstone blocks, worked by stonemasons of Castell’Umberto.

The Church with three naves, with gabled roof, has two large terraces on the aisles.

On the left aisle the bell tower rises majestically, with pyramid roof covered with tiles.

The eleven bells, which houses are all coming from the churches of ancient Castania, like the statue of Santa Barbara, wedged at the bottom.

Main prospectus you can admire, a marble bust of our Lady of the Assumption, by the sculptor Antonio Messina Bonfiglio, that surmounts the main door; the colored glass of San Vincenzo Ferreri and  and a bas-relief depicts a miracle of St. Vincent.

Inside, an assumption of the Virgin above the chancel, Florentine painter Giuseppe Francini. On the right side of the transept, a Corinthian altar from old array, while, on the left side, the altar dedicated to Patron Saint Vincent Ferrer. From the old matrix, originate a crucifix of 1600, Baroque statues of St. Giuseppe and child with STS. Peter and Paul; the marble group of the Annunciation and the statue of Santa Maria di Jesus, both from the school of Gagini are; the small statue of St. Catherine of Alexandria; the canvases of Santa Lucia, St. Bartholomew’s martyrdom and Holy souls in purgatory, the baptismal font in red marble of San Marco and the organ of Annibale Lo Bianco dated 1710.

Restored according to the dictates of Vatican Council II and dedicated to the undivided Trinity in honour of Maria SS. Assunta, the May 4, 2008.

On the opposite edge of the square, leaving behind the fountain dedicated to emigrants in Australia. Past the marble bust depicting the dr. Vincenzo Franchina, placed in the shade of the tree dedicated to Arnaldo Mussolini, we come to another meeting place, the park Sandro Pertini.

On the edge of the park, a sandstone fountain, one of the earliest works built when the town was transferred from the old to the new site.

In front of the park, the school building and continuing beyond reach in the Park of the memory. Park entrance is from the “Casa del Fascio”, which houses the municipal library and the historical archives of the municipality.

Further, among the tree-lined avenues from “Cedars of Lebanon”, a marble stump remembers the fallen of two world wars. Inside the Park: the Congress Centre, a tennis court, a children’s playground and swimming pool. On a hill just beyond, looking toward the North, the Church of St. Cross and round about as far as the eye can see the Tyrrhenian Sea with the Aeolian Islands.